The active pace of life makes one look for ways to cheer themselves up. For some it is coffee, for others it is energy drinks. The range of non-alcoholic energy drinks includes sports drinks, carbonated drinks, concentrates, ready-made bottled tea, coffee, and bottled water.

Today, energy drinks are the most popular drinks among young people in the USA. The most active age range is between 18 and 34 years old.

In 2020, global sales of energy drinks reached $57.4 billion. According to forecasts, this figure will only grow in the next five years. It is expected to grow at a CAGR of 7%. Such forecasts are explained by the desire of young people for sports, active lifestyles, and urbanization.

The largest volumes of energy drinks are consumed by North Americans. However, according to researchers, the situation may soon change and the Asia-Pacific region will begin to rapidly develop its market in this direction.

The most famous of energy drinks are: 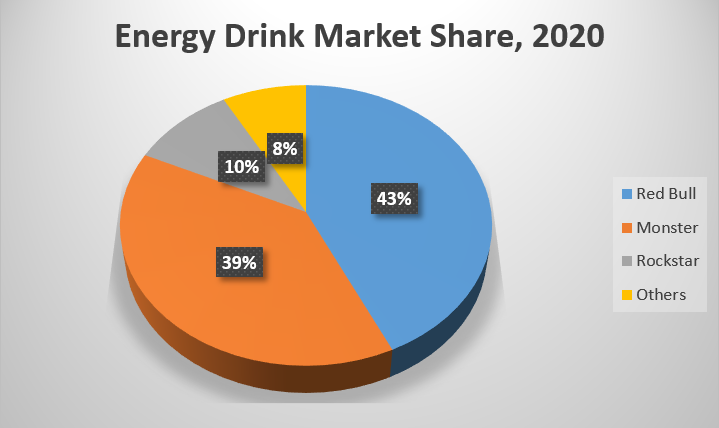 Red Bull is an Austrian private company that is one of the market leaders in the global energy drinks market. The drink was first introduced in 1987 in Australia, and only in 1994 did sales go beyond the borders of the country - in Germany. In 1995, the energy drink appeared on the UK market; in 1997, in the USA; and in 2004 - in Canada.

The product line includes different flavors (original, sugar free, cranberry, blueberry, calorie free, and so on). The size of the issue is a can of 8.4 ounces.

The main ingredients of the energy drink:

Red Bull is available in 171 countries. More than 12,000 specialists work for the company. Sales are growing rapidly in Brazil, India, Africa.

Monster is a California-based holding company that entered the market in 1985. Today, it employs 3,500 people. The Monster Energy line was first released in 2020. This was the company's second attempt to compete with Red Bull. The first failed in 1997. The form of Monster is a 16 ounce can. There are 36 varieties and 5 flavors on sale.

In addition, Monster includes brands such as:

One serving of the energy drink contains 80 mg of taurine and 160 mg of caffeine, which is considered high, as well as an amino acid that stimulates mental development.

Monster energy drink is available in 100 countries and ranks second in sales after Red Bull (at the end of 2019). In addition, in 2014, the company entered into a long-term partnership with Coca-Cola, which immediately bought 16.7% of Monster's shares. This has significantly strengthened its position in the market.

Rockstar Energy was introduced in 2001 in San Francisco, California. Today, it is available in 8.4, 16, and 24-ounce cans. There are 30 flavors in total, including original, no calories, revitalizing, coffee flavor and more. Sold in more than 30 countries.

Rockstar later became part of PepsiCo and is part of the product line along with Gatorade, Pepsi, and Tropicana. PepsiCo has announced the forthcoming relaunch of the Rockstar brand in the US and internationally. 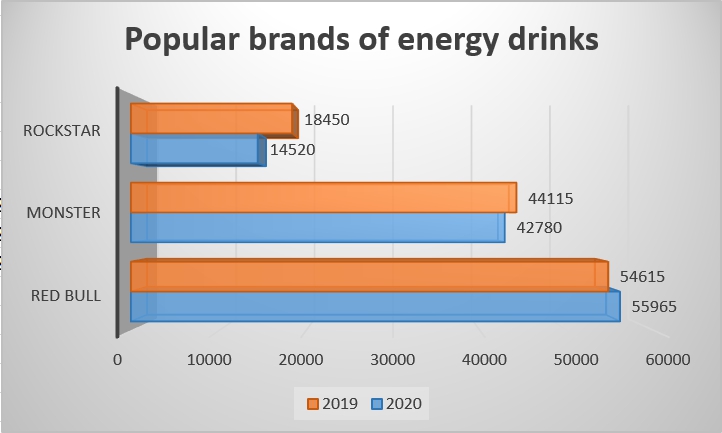 Red Bull retained its position in the market even in the crisis year of 2020. However, sales of energy drinks in the world are steadily increasing in 2021.